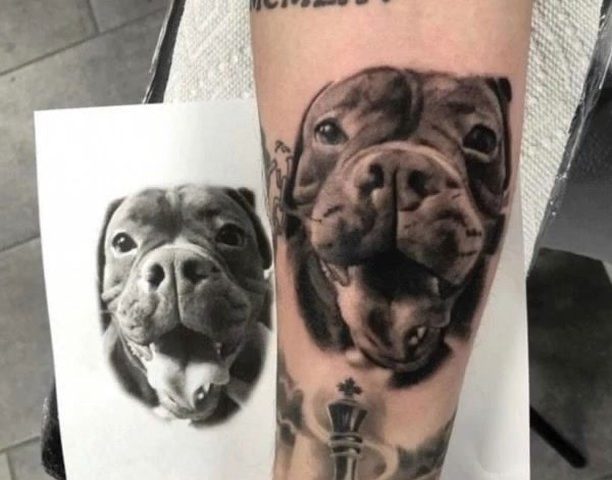 Realism tattoos are expressive forms of tattoo artistry that have been created using a meticulous and unique style. The aesthetics and styles come in a variety of different artistic statements and just about any type of image can be re-created in tattoo form. Whether you are looking for a depiction of a painting, an animal, a flower, a photograph, a portrait etc., we can help you reach your goal.

It’s simply awe-inspiring to see 3-dimensional work on the human body. It takes many years of hard work, motivation, and devotion along with instinctive talent to have what it takes to become a realism tattoo artist.

The Birth of a Realism Tattoo

It all starts with an idea that is put into the form of a stencil and then created on the skin. It’s really quite astounding to comprehend how much time and effort is put into this type of tattoo artistry by the masters in this field. In fact, the results can be extremely amazing with tattoos looking so lifelike that it appears that they will jump right out at you from the skin.

A tattoo master must have exceptional talent and patience in order to present the final art product, which would include extreme layering and detail. It’s this extreme layering and gradual shading that go into creating these 3-D effects that make the tattoo stand out. The technical training and the skill behind one of these tattoos is phenomenal.

If you’re looking for a realistic tattoo then make sure you look for an artist with years of experience doing realism tattooing. You must also be sure that the pigments of ink used are the highest quality available so that your tattoo will last for years without fading.

Find out more about realism tattoos or schedule an appointment by visiting our website today at http://www.hontattoo.com/realism-tattoos/

Japanese tattoos have a long and amazing history behind them packed with a ton of significance and meaning. This is why this art form is so popular today and it becomes even more well-known as time goes by. All tattoos that are related to the Japanese culture have a strong and rich historical background behind them, which makes them so much more appreciated by both the person wearing the tattoo and by the people that are lucky enough to view them.

Japanese tattoos have been inspired by the history and culture of the Japanese people. You’ll find that some tattoo designs have been inspired by a variety of old figurines that were placed on tombs. The actual history of Japanese tattooing goes back to at least 5,000 years ago. At this time, clay figurines in archaic tombs were discovered with tribal tattoos on them and there are also references regarding the tradition of Japanese tattooing in Chinese texts from approximately 297 AD. In these texts it was mentioned that any body part of a man of any age would have tattoos on it.

Tattoos were part of the culture up until the late 1800s when they were banned in Japan. This was due to the fact that Japan wanted Europe to think of it as a sophisticated country. Japan also wanted to lower the amount of criminal activity that was occurring at the time. Criminals, in fact, that were going to receive long sentences or even a death sentence, were tattooed with either dots on the forehead or on the arm or with Japanese characters or symbols.

At the time when it was illegal, a number of different people continued to get tattoos as part of an underground culture. Back then these tattoos were a symbol of bravery and power since they were illegal to get and the people receiving the tattoos had to suffer intense pain for many hours to get them.

Today, Japanese tattoos are no longer illegal and in fact, they have become a well-respected and important aspect of the Japanese culture. Popular Japanese tattoo symbols include cherry blossoms, the Japanese Phoenix tattoo, the Japanese demon tattoo, snakes, masks, dragons, the Japanese wave tattoo and much more. There is an incredible book that describes this art form called Bushido: Legacies of the Japanese Tattoo. Here you can read about the experiences of Takahiro Kitamura, who was a student and a client of Horiyoshi III, a famous tattoo master of Japanese origin.

If you’re looking for a Japanese tattoo studio in North York or Markham where you can receive a traditional Japanese tattoo or a detailed and brilliant piece of art that contains the symbolism of the Japanese culture, please feel free to drop by any time for a visit or give us a call. Our Japanese tattoo designs are based on the rich historical qualities of this art form as it has continued to remain popular throughout the ages.